Twenty internet service providers are offering high-speed internet access for no more than $30 a month to all U.S. households eligible for the federal government’s $14.2 billion Affordable Connectivity Program (ACP).

The program, which replaced 2021’s temporary, pandemic-inspired Emergency Broadband Benefit Program, had more than 14.6 million households participating as of Oct. 24, an increase of more than 60 percent since the end of 2021. The rate is specifically offered for ACP enrollees, who qualify because of their lower household income.﻿

During a White House ceremony on May 9, President Biden likened the need for high-speed internet to how his grandfather talked about the need to have a telephone. “It’s pretty consequential,” he said. “High-speed internet is not a luxury any longer. It’s a necessity.”

As the program has matured, the percentage of internet subscribers 50 and older has risen as a share of participants, according to ACP data as of Sept. 1, the latest available.

Late last year when the old program had 7.1 million subscribers, about 2 in 5 were 50 and older. That percentage has grown to almost 43 percent, including more than 2 million 65- to 84-year-olds and almost 165,000 subscribers 85 and older. While the percentage of the oldest adults in the program has stayed around 1 percent since the subsidies began, the number of subscribers 85 and older has almost tripled since late last year.

Nearly 40 percent of the households in America qualify for the $30-a-month credit, which means “most folks will get on for nothing,” the president said. Among the 20 providers that are offering all ACP-eligible families at least one high-speed plan for $30 a month or less are both huge carriers, including AT&T, Comcast, Cox Communications and Verizon (Fios only), and smaller providers, including IdeaTek in Kansas and Jackson Energy Authority in Tennessee.

Internet speeds at that price must be at least 100 megabits per second (Mbps) where a company’s infrastructure supports it. That’s fast enough for a family of four to work from home, browse the web and stream high-definition video, the administration says.

The 20 firms collectively offer high-speed internet in areas where more than 80 percent of the U.S. population lives, including nearly 50 percent of the rural population, according to a White House news release. In addition, Biden announced the launch of a website, GetInternet.gov, that has details on how Americans can sign up for the ACP and how they can find participating internet providers in their area.

"It's become more important than ever before that we get every household everywhere reliable and consistent broadband access," Jessica Rosenworcel, Federal Communications Commission chair, told an AARP tele-town hall meeting June 9. "I think that goes for young and old alike, but I think when it comes to older adults that we're going to see a lot of the telemedicine policies and practices that were adopted in the pandemic are going to continue when we get to the other side and I think that's going to make health care more accessible to older Americans."

Dawit Kahsai, senior legislative representative for AARP, said the organization “is pleased to see the commitment from the White House to ensure that high-speed internet is not only accessible but affordable for all Americans — including older adults.” AARP has championed high-speed internet access and digital literacy for all ages to help them connect with friends and family, work and see doctors remotely as well as shop and stream entertainment.﻿

Higher income limits for many﻿

Both ﻿the ACP and the previous Emergency Broadband Benefit Program provide subsidies to low-income households to enable them to afford high-speed internet access, but they aren’t identical.

The income limit for the Affordable Connectivity Program increases with the number of people living in the same household. 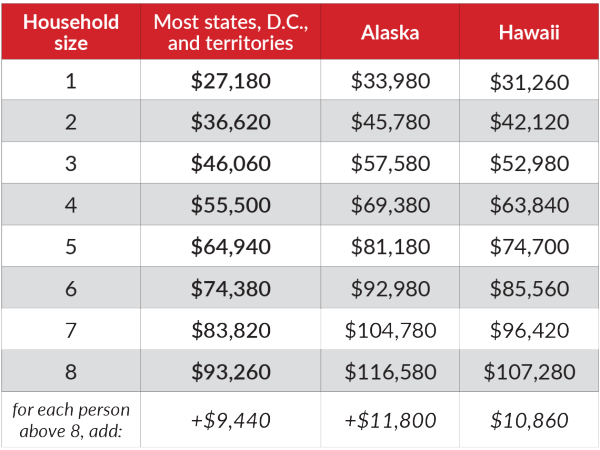 Benefit: The maximum monthly benefit change﻿d to $30 a month﻿ from $50 a month for households not located on tribal lands. Households on Native American tribal lands qualify for up to $75 a month. Alaska, New Mexico and Oklahoma are the states with the highest percentages of Native Americans, according to the Census Bureau.

Eligible households also can receive a onetime discount of up to $100 to purchase a laptop, desktop computer or tablet from participating providers if the consumer contributes $10 to $50 toward the purchase price.

Transparency. The new program prohibit﻿s upselling — telling customers that they can’t use the benefit on their older, less﻿ expensive data plans — or requirements for extended service contracts. These are complaints that some beneficiaries had about their carriers under the old program.

It also require﻿s companies to provide standard labeling for internet download and upload speeds, monthly service costs, taxes, ﻿and any equipment and other fees﻿. Nutrition labels on food inspired the move.

“﻿If [internet providers] have the more affordable plan that works for you, you can choose it,” AARP’s Kahsai says. So participants in the new program may pay less or receive free subsidized internet﻿, even with the lower subsidy. The White House has asked providers not to add fees or data caps to their $30 plans.

“The [FCC] should monitor labels to ensure that ISP ‘explanations and context’ or efforts to make labels more ‘understandable’ do not result in misleading or confusing information being provided in the labels,”﻿ AARP wrote in a March 24 submission to the FCC. AARP has long worked for low-cost internet solutions for older Americans, who need high-speed broadband for teleworking, medical and health-related information and news, online health﻿ care consultations ﻿with doctors and nurses, and interacting with loved ones and friends.

The FCC defines high-speed broadband as 25 Mbps ﻿for download speed and 3 Mbps for uploads. All of a company’s internet plans that meet the FCC standard﻿ are eligible for the subsidy.

Internet providers that are offering all ACP-eligible families high-speed internet access for $30 a month or less:

The Affordable Connectivity Program is just a part of the roughly $65 billion to improve access to high-quality, high-speed internet access contained in the bipartisan infrastructure bill that Biden signed into law Nov. 15., 2021.

Some of that money will go toward what Kahsai calls “digital equity.” The new law allocates $2.75 billion for digital literacy training to make sure that everyone — regardless of language, ability or age — has the skills needed to take advantage of their connection to the internet.

About $42.5 billion is being allocated to bring high-speed internet to unserved areas that will benefit families of all incomes. These often ﻿include rural areas where population density is low and mountainous areas ﻿that can be challenging for companies to reach.

This new service also must have speeds of at least 100 Mbps for downloads and 20 Mbps for uploads. Each state will start out with $100 million from that pot of money﻿ and will be able to get more based on its unserved and underserved needs.

With the new law, “we have an opportunity to put a dent … in the digital divide,” Kahsai says.

More than 14.6 million enrolled in ACP

About 14.5 million Americans — and 22 percent of those 65 and older — don’t have access to high-speed internet, at least 25 Mbps download and 3 Mbps upload speed, the FCC estimates. Other estimates say that as many as 42 million ﻿people in the U.S. are on the wrong side of the digital divide.

The FCC says it hopes to release the first draft of a new national broadband map to the public in November. It is now allowing local governments, tribes, and internet service providers to offer feedback to its preliminary findings.﻿ The map's goal is to offer an accurate picture of the availability of fixed broadband internet access across the country.﻿﻿

The ACP doesn't count the total number of people served through its program. Instead, it looks at households since utility bills serve addresses, not individuals. More than 14.6 households ﻿were ﻿enrolled as of Oct. 24, according to the ACP website.

Puerto Rico has the highest rate of ACP enrollment per 1,000 households﻿ as of Oct. 24, according to the website. It has second-highest poverty rate, behind American Samoa, among states and territories that are part of the U.S. Census Bureau’s American Community Survey.

Louisiana, New Mexico, Kentucky and Ohio round out the top five for ACP enrollment rate. Those jurisdictions have the fourth-, fifth-, sixth- and 18th-highest percentages of residents living in poverty.﻿ ﻿

Who is eligible for the ACP?

People who use certain federal assistance programs, including Federal Public Housing Assistance, Lifeline, Medicaid, the Special Supplemental Nutrition Program for Women, Infants and Children (WIC), the Supplemental Nutrition Assistance Program (SNAP) and Supplemental Security Income (SSI). ﻿Lifeline ﻿offers up to a $9.25 discount off monthly phone or internet bills to households that make less than 135 percent of the federal poverty guidelines or have at least one family member in some public assistance program, such as Medicaid, SNAP or SSI. For a family of four to qualify based on 135 percent of ﻿this year’s federal poverty guidelines, its annual income would need to be below $﻿37,463.﻿

Households whose children get free or low-cost school meals.

Households that participate in programs specifically for tribes, such as Bureau of Indian Affairs General Assistance, Food Distribution Program on Indian Reservations, or Tribal Temporary Assistance for Needy Families.

College students who receive student aid in the form of federal Pell grants.